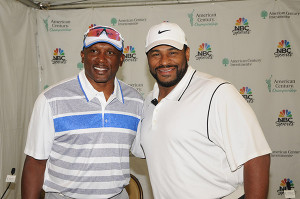 The American Century Championship, has been a major attraction in Lake Tahoe for over 25 years. With stars from the world of sports and entertainment like Hall of Famers Charles Barkley, John Elway, John Smoltz and Greg Maddux; world champions Steph Curry and Aaron Rodgers; entertainment icon Justin Timberlake and actors/T.V. personalities Ray Romano, John O’Hurley and Alfonso Ribiero, the tournament is Celebrity golf’s premier event.

The 54-hole competition is held every year at Edgewood Tahoe Golf Course and the event has raised over $4 million for charity. The spectacular scenery of the resort destination casino town attracts people from around the world and is the pride of the host Lake Tahoe Visitors Authority. The course plays to 6,707-yards, features water on 14 holes and quick, undulating greens and spectacular scenery and is sponsored by American Century Investments, a premier investment manager serving financial intermediaries, institutions and nearly two million individual investors.

Check out our library of fun videos from past tournaments including: